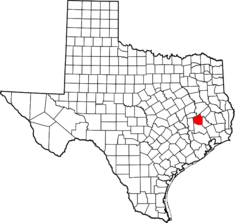 A Brief History of Huntsville

Huntsville, the county seat and the largest town in Walker County, is older by about 11 years than the county itself, as it was established in 1835 by Pleasant Gray, who came here from Alabama while the area was still in the Washington County boundary.

Gray first arrived at the future town site in 1830 or 1831, and camped near a spring which was located just north of the present site (1954) of the post office.  Finding the neighboring Bedai Indians to be friendly and desirous of trading, and because of the areas similarity of his native Alabama countryside, Gray decided to eventually settle here and make this his permanent home.

Gray returned 2 or 3 years later, accompanied by his family and his brother Ephriam (became the first Post Master).  On the northwest corner of what is now the court house square near the spot presently (1954) occupied by Walker County Hardware Company, Gray built his home.  While living there, Pleasant Grays wife Hannah, had a fourth child, David Crockett Gray, who was the first baby to be born to the couple in Huntsville.  Across the street from his house, near where the courthouse now stands, Gray built another log cabin which served as a trading post.  Dabney, White, "Watch Walker County Grow", Houston Chronicle, April 16, 1927.

On November 20, 1834, Gray wrote the Mexican government of Coahuila and Texas and presented the following petition:

​"The Honorable Special Commission of the Enterprise of the Citizen Jose Vehlein: I, Pleasant Gray, a native of the U.S. of the North, present myself before you, with due respect, and say:  That attracted by the generous provisions of the colonization laws of this state, I have come with my family, consisting of my wife and three children to settle myself therein, if, in view of the attached certificate, you should see fit to admit me in the class of colonist, conceding to me one league of land in the vacant tracts of said enterprise.  Therefore, I supplicate to you to be pleased to grant me the favor which I implore, for which favor I shall live forever grateful."  Deed Records of Walker County... Pleasant Gray

A decree ordering the land surveyed was issued a few days later, on November 24, but i was the following year on July 10, 1835, before Gray was granted possession of the seven square miles of land.

Gray's trade with the Indians was very successful, and his profitable business soon attracted other settlers to the new town, which he named after his native city of Huntsville, Alabama.  The settlement was laid off into blocks covering an area of one square mile.  The streets were; from north to south, Milam, Fannin, Cedar, Spring, Lamar and Tyler; and from east to west; Travis, Burton, Main, Jackson, Bell and Farris.  Huntsville Item, McFarland, March 6, 1941

Huntsville was incorporated by act of Congress of the Republic of Texas on January 30, 1835, which reads in part as follows:  Gammel, Laws of Texas, II Pleasant Gray sold his trading post in 1846, as he was no longer able to take care of it.  Two years later he left Huntsville headed for California on a prospecting tour, but died before reaching Santa Fe somewhere along the Platt River.  Although newspaper accounts attributed his death to cholera, another version was circulated among Huntsville citizens.  It seems that Gray admired a horse owned by an Indian Chief in the area and offered to buy the animal, but the Indian refused to sell.  A short time later the Chief was found murdered and the horse appeared in the possession of Gray.  No proof could be found that he actually had anything to do with the crime.  The Indians had no doubt about the matter, however, and were reported to have followed him after he left for California and killed him in revenge. (L.B. Baldwin as told to Baldwin by J. Robert King, Sr).

The first store building in Huntsville, other than the trading post was built by Gray close to the spring where he camped the first visit to the area in 1830, between the present jail and Aaronson Brothers Dry Goods store.  The building was constructed of logs, and was rented to Thomas Gibbs and Gardner Coffin for $2.50 per month, for the operation of a mercantile company.

Pleasant Gray was responsible for the town's first cemetery.  In 1847 he deeded to the town, in consideration of one dollar, and his "...regard for the health, prosperity, and success of the people of Huntsville and its vicinity..." land for "...the purpose of a place of burial free to all persons and for no other purpose."  The plot fronted on Milam (now 9th) street and reached as far as Travis (Avenue I) one side and Houston Street (Ave H) on the other.  Deed Records A, 209 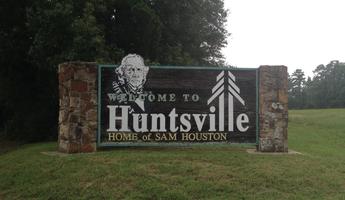